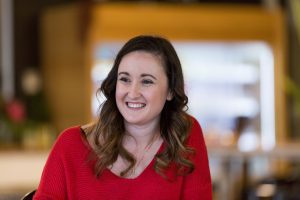 In January of 2017, Cotton On Group’s very own Kelly Christy embarked on a trip to Uganda as part of her role as Commercial Risk Specialist.

During her time there, Kelly was blown away by the magnitude of progress made in Cotton On Foundation supported communities and described the experience as an “eye opener”. But there was one thing that particularly stuck with Kelly and continued to play on her mind when she returned home: shoes.

While observing local children playing and working outside with no shoes on, Kelly began thinking; “we get up every morning and just put a pair of shoes on. You don’t think twice about it.”

“A lot of the kids end up in the medical centre because of things that happen to their feet. Sometimes they can’t attend school because they don’t have shoes.”

Having an avid interest in the workings of Foundation for her past five years within the Cotton On Group, Kelly says that “being there, seeing it and experiencing it all-  it kind of stirs something in you and you start to think how you can help in any sort of way.”

Shortly after returning, while preparing her two and half year old son Ari for bed, he asked if he could put his shoes on. And so came the idea to create a children’s story book named “You Don’t Wear Shoes to Bed.”  The beautifully written book was then published with the purpose of raising money to provide shoes for children who need them most. 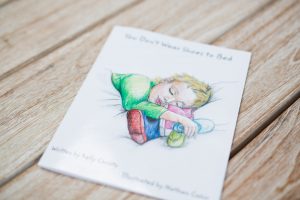 Saying that writing the story was the quickest and easiest part, Kelly explained that the entire process from start to finish took approximately ten months to produce. After the story was written, Kelly came across Rubi’s Nathan Cahir who volunteered to illustrate the book. “He seemed to just sort of capture everything. He sent it to me and I thought it was perfect and that he didn’t need to change anything.”

Because International, a company in the US who specialise in creating quirky products to help individuals and communities in need was nominated by Kelly to produce and provide the shoes. 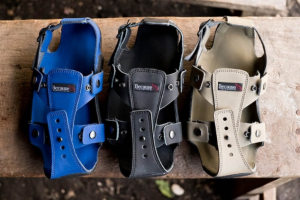 The Shoe That Grows. Source: Because International

Kelly fell in love with their product, “the shoe that grows”. These shoes are not only sturdy and comfortable, but sustainable, as they can be expanded to grow as the child’s foot does, and will last approximately five years.

After a lengthy process, Kelly is relieved to finally have the final copy in her hands ready to go! Within the first half an hour of posting about her book on Kelly’s personal Facebook, she received over 30 orders, and the orders have continued since then!

And the best part? One book sold = one pair of shoes provided to a child who may not otherwise have access to footwear.