I was born into a family of six – I’m the sixth little angel (haha). My parents were both teachers in the government owned Nabisunsa Girls School – dad was the Deputy Principal and mom was a teacher.

A year after my birth, dad decided to take a job upcountry in Arua district as Head Principal. It was war torn at that time and no one wanted to go there but he did. After Dad left, we moved to Mukono, Seeta and mom got a job at NCDC (National Curriculum Development Centre) where she stayed to this date and is now the Director.

Growing up my parents were extremely strict there is no way I got off the hook for a bad grade or didn’t play sport. Basically we all had to be something in school. There was no excuse whatsoever and it didn’t help that everyone had their A game on all the time. Basically, my siblings were always a good example. Everyone had something going for them; the boys had cricket and dance, the girls ranged between basketball, track, dance and taking part in school leadership. All the schools we went to and subjects we studied were carefully selected, you couldn’t tell my parents you couldn’t do something because they believed you could and most of the time we excelled.

If you didn’t, you had a tutor, or my older siblings would help you out because there was no room for failure in the family as both of my parents were fully involved in education. Mom ensured we all learnt a language in school and participated in various school activities. School breaks were times to learn a new skill, like sewing, cookery and language or polish your grades if you didn’t perform to standard. It was tough but molded us.

During that time many of the people that I went to school with would get whooped if they didn’t work hard but mom was different. Something in her “check yourself” speech just fixed the wires in your head and you just did whatever you needed to do. 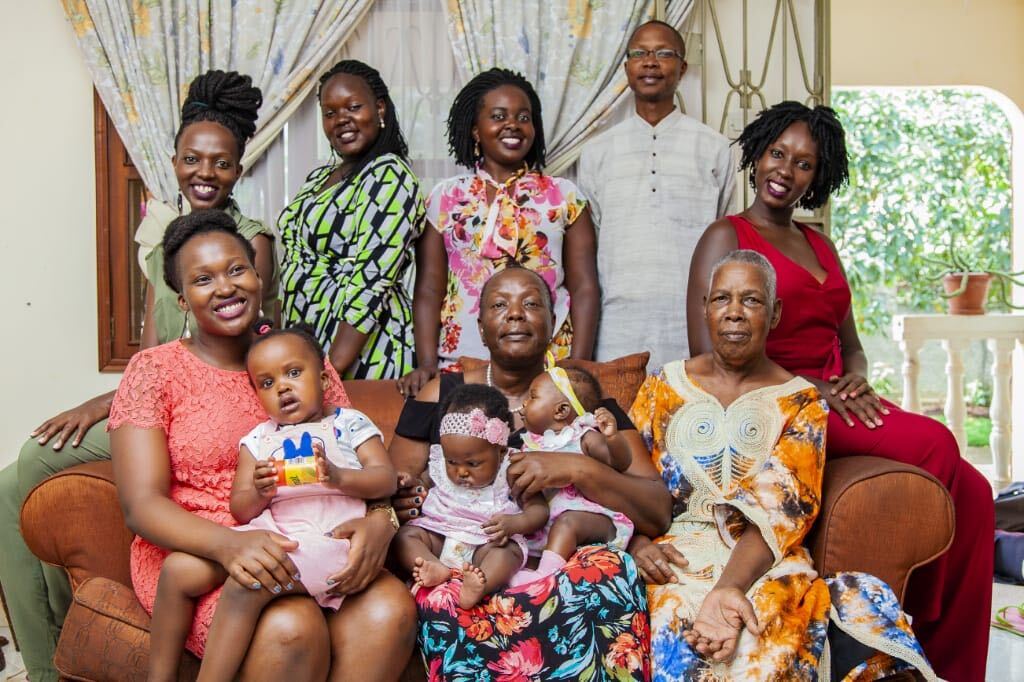 Some of my family – mom is in the middle holding two of my nieces.

I started kindergarten at a school near home in Seeta, called Nsamo girls’ school then went to Silver Spoon School, for four years and then finished primary at Taibah International School. After that, I joined Nabisunsa Girls’ School where all my sisters had been for secondary school. Because it was a more traditional school to all my previous schools it was tough, strict and I’ve got to say you’d have to be strong to survive, however it contributed a lot to who I am now. If I get beaten down I can literally get up from anything. Unfortunately, I decided not to continue A level at Nabisunsa and moved to Greenhill Academy; mom was super against it because she considered Greenhill too soft. A level was good though, I did subjects I enjoyed, that is geography, economics, art and math. I loved it and I enjoyed school more than at Nabisunsa.

After high school I started to apply to different universities but mom thought that instead of sitting around while waiting for responses I could study something or learn a skill, so I enrolled into a six month interior decoration course because I had been interested in design and architecture since I could remember. I got into a college in California with my cousin who is my age mate and we were going to live together but mom and dad had a change of heart and decided Australia was a better option cause my brother was here and I would have some sort of guidance.

So I applied for Architectural Building Design at RMIT and a few weeks later I got a confirmation email. No one expected it because Australia is impossible to get into, but there I was with my acceptance letter in complete denial and not sure of what to expect but extremely glad for a great opportunity ahead.

After finalizing all the paperwork, mom and dad were so excited for me. They planned to fly with me before I started school so we would get to know the place together and also it would be a mini vacay away from everything. Dad had retired that year before and they thought it might be a different scene as he’d never been to Australia, but mom had had the opportunity to when she did a short course at University of Sunshine Coast. But in November 2016, dad got sick and passed on and everything changed. When Francis came back from Australia for the funeral mom suggested I should just go back with him, so I did in December 2016.

When I got to Melbourne, it felt like a fresh start, a blank canvas to sketch whatever I wanted. I only knew three people: Francis (my brother) and Donah (his wife), and my uncle in Queensland. How was I going to survive? I had no clue. Everyone I knew was in Uganda. All 18 years of memories of my life were in Uganda. So, for the first few months I decided I was going to embrace this new life, and I did. My friends at university, they became my new life. But eventually I got home sick and there’s not enough Facetime calls that can warm your heart when you feel like that – sad. Anyway, at the end of 2017, mom comes over for Christmas and New Years and we have a mini vacay which was nice and a reminder that I got this. And my friends were also very helpful, we went out and did so many things together, so they became my mini family here.

In January 2018, I met Kevin Higgins who was friends with my mom. Mom introduced us and one thing led to another, and I was able to get a great opportunity working as an intern with Hot Property at head office as I finished my course at RMIT. I have continued to work there to date.

I have learnt and continue to learn so much from my team. They are a great group of people and I’m so privileged to be a part of it. In 2019 I joined the retail team at Cotton On Mega DFO South Wharf where I also met a lovely team of people and only worked on the weekends. They always keep it exciting at work. During COVID-19, I was blessed with another great opportunity working with Cotton On Foundation on a Ugandan project for Busibo Central District. It was nice and a good experience, being able to work with the Australian and Ugandan team. I have continued to help them with some smaller projects.

After I graduated from Architectural Building Design at RMIT I decided to further my studies and I applied to multiple universities for both architecture and interior architecture. I got into all, but I had issues with my visa as I didn’t get my transcript in time to finish renewing it. My first choice was Deakin University but I missed the deadline and ended up at Swinburne University studying a bachelors in Interior Architecture which I love.