We’re so excited to share with you a story from North-East Arnhem Land from a recent Learning On Country Galtha Rom, as told by Rrawun Maymuru, Senior Cultural Advisor at Dhimurru Rangers.

The Learning On Country Galtha Rom was held at Ḏaliwuy Bay in partnership with Yirrkala School and Dhimurru Aboriginal Corporation and we’re so lucky to get this unique, personal and truly beautiful insight from Rrawun into the Yolŋu world: 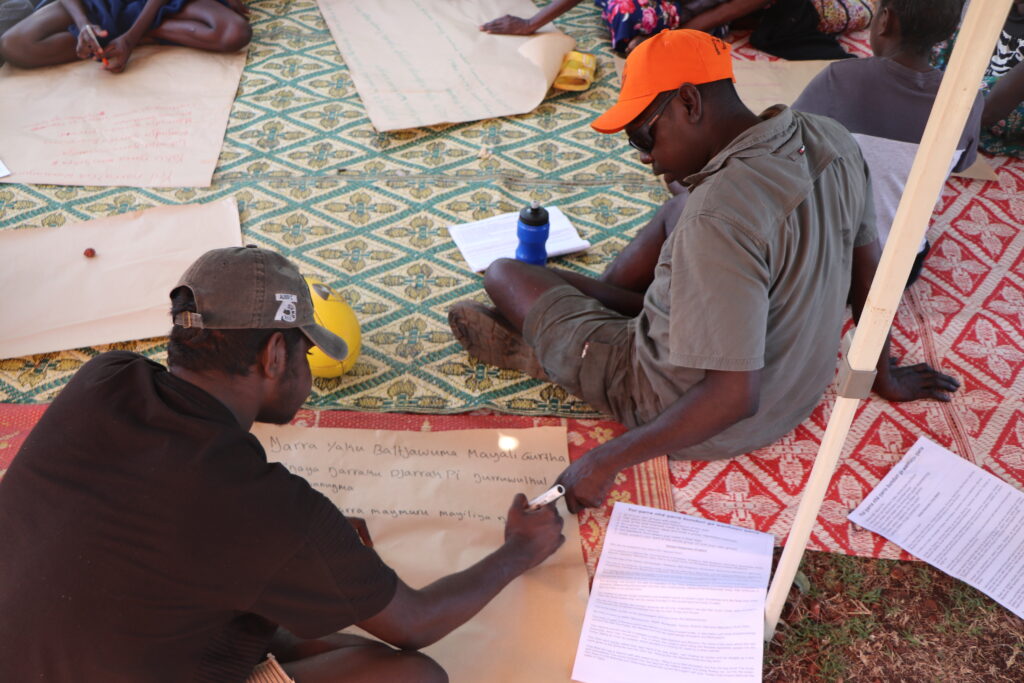 Rrawun (in the orange cap) and a student

They get to learn their own authority and their strength for the next generation.

With respect for their cultural awareness.

We were teaching young Yirrkala students from middle years to year 12, about the life and what is coming for them.

We think that there is the Balanda (non-Indigenous) way of education and the other is Yolŋu way education.

It’s like if you are in balanda world you have to follow them and their structures and their rules according to their time.

For Yolŋu we got our own world as well. That world is when you are living with the clans and the tribal leaders and the leaders of the clans.

How would feel or handle trying to be working in another world if you can’t handle your own world?

From that day when you are born yolŋu he’s got a name – surname, skin name, tribe name and clan name.

Then, from there he has got a totem.

And from there he got songline and the meaning of the songlines and the land.

It means Yothu yindi: mother and child. Mother is Yirrijta and the child is Dhuwa. 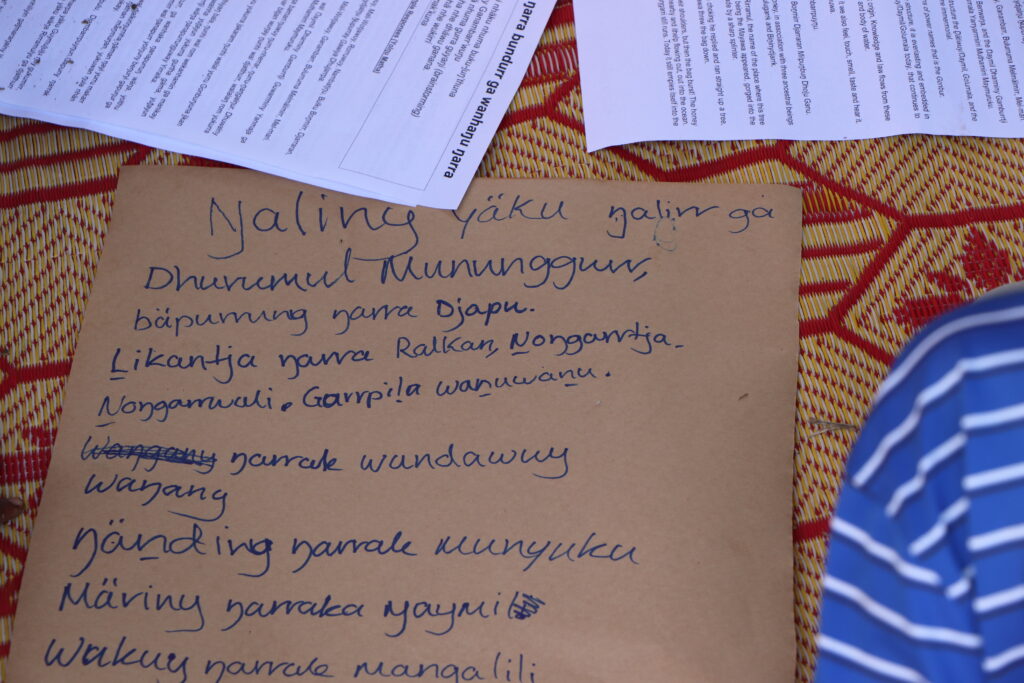 Some students were very excited to find out the deeper or true story about their names. They knew their name had a meaning – like spear or big rocks, or tree or honey or land,  once they knew that about their first name then they started on their surnames.

Surname has a meaning. Elders told them the meaning of the surname.

Some students even took their work home to share with their families. They took it home as homework and shared it with their grandparents. This really gave the student a better result.

Without it we will be standing there without anything.

They were writing about their own  ancestral journey, Wangarr.

In the future we want to keep going on this journey with the students.

What they are thinking about from now to when they finish and graduate from School. Some might think that they will go further and do more education, and then get a degree. From Yol ŋarra they might go to yolŋu university stage to use the knowledge of his or her tribe, and he or she’s honoured as the caretaker of the tribe. From another journey degree, how wise they are, how deep their understanding and how yolŋu see them as a leader and a person. Positive, and a leader, rightful and honest and with good leadership qualities –  a quality person.

We look for quality in miyalk and dirrama (women and men). Someone who can relate to all people in the clan and outside of it.

In the future we want to include manikay (important cultural songs) and more activities relating to bungul (cultural dancing) and what it is all about.

It might include collecting gapan (the white clay) and dancing.

Djuŋgayi get and make a paddle to catch turtle or get gara to catch stingray or make painting. So doing things that relate to a story. So instead of only saying it put it into language,  we have language that is only used at special occasions. It the language of the manikay.  We use special ancient language that is connected to the music and the story and the place.

So we ask the right person to tell us about the song. The djuŋgayi and the owner know about the song and what is needed to carry it out like what to paint to do and what tree branches to use. If spears or woomera are needed.

It is the language of the manikay.  We use special ancient language that is connected to the music and the story and the place.

Testing their knowledge and see what they are talking about.”

As an Australian born company, our Indigenous Projects in the Northern Territory are a really important part of our development work and a cause that's close to our hearts. Read more